So, in no particular order, here are my creative resolutions for 2014.

I was particularly inspired by two bloggers’ recent posts on the importance of setting writing goals and keeping journals.

This is the very serious looking notebook where I plan my blog posts and jot down ideas.

I’m a big fan of those little notebooks which they give away with magazines. I don’t know what other people do with their free Harpers Bazaar notebook, but mine contains meticulous plot notes!

Does anyone else have any writerly superstitions? I can’t write except with a Bic finepoint pen! I write all my stories out by longhand in little notebooks, although sometimes the design doesn’t suit the storyline.

Hmm, unfortunately this sounds like work. My resolution says “consider” not actually “set up”.

I set this blog up six months ago using the first template I saw. Then people started popping in, and I haven’t really had a chance to redecorate!

However, this also sounds like work. Put this off for a month or two, I think.

I’ve got to read more. I’m going to read at least one book a week. This is what’s on my reading list right now: 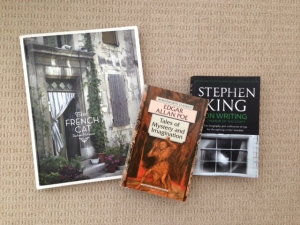 Tales of Mystery and Imagination by Edgar Allan Poe

Frozen Earth: the once and future story of ice ages by Doug MacDougall

On Writing – a Memoir of the Craft by Stephen King

The French Cat by Rachel McKenna

“The French Cat” is admittedly a photography book, containing photographs of French cats. In this book I learned that Antoinette Deshoulieres, a poet at the court of Louis XIV, used to write letters in the name of her cat, Grisette, to the Duc of Vivonne’s dog.

I guess this proves that cats were always destined for literary greatness, as evident from the number of blogs that cats seem to be writing today 😉

This site uses Akismet to reduce spam. Learn how your comment data is processed.