I remembered a word I had heard the monks say, a word spoken with disapproval, a word as bad as a deadly sin. A word that was rich and alluring, a word describing something I knew to be wrong, but which I knew was exactly what lay in the pages before me. Alchemy.

– Elise starts to suspect something strange is going on in the

‘The Alchemist of Paris’

Alchemy is a word as alluring today as it was in the Middle Ages. But what exactly is alchemy?

Basic alchemy is about transforming natural elements into something new. The creation of bronze from mixing copper and tin must have seemed magical in ancient times. 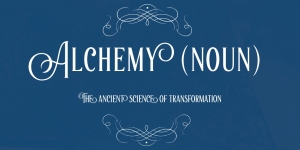 The practice of alchemy dates back at least to Ancient Greece (the word derives from the ancient Greek (chumeia) meaning the casting of metals). Another great centre of alchemical learning was Alexandria. Alchemy was also practised in China, India and the Arab world, where the term ‘al-Kimiya’ derived from the Greek, gives us the word ‘alchemy’.

As soon as people learned they could transform basic metals, the quest to create precious metals began. The rumour that alchemists had discovered the formula for gold, added to the mystique of alchemy in the Middle Ages. There was also a belief in the existence of the mysterious ‘Philosopher’s Stone’, a substance that could transform any metal to gold.

The study of alchemy led to many real discoveries and laid the foundation for modern chemistry and medicine. By burning, distilling, melting and condensing substances, scientists discovered phosphorous and nitric acid. Sir Isaac Newton and Phillipus Paracelsus were two scientists who studied alchemy and made many scientific breakthroughs.

In addition to metals, many alchemists also explored the medicinal possibilities of alchemy. One of the most potent rumours was the existence of aqua regia, the elixir of life, a drink that could convey not only eternal youth, but even immortality on the drinker….

However the writings of the ancient alchemists contained many warnings on the limits of the science. The dragon symbol often appeared in alchemical texts, representing the metaphorical ‘monster’ which could appear at any time during an experiment. Many alchemical experiments involved highly volatile mercury. Modern scientists wonder if the ancient alchemists were warning of the dangers of splitting the atom.

Alchemy lay the foundations for modern chemistry and medicine. But with its promise of gold, immortality and defying death, it has never ceased to capture the imagination.

If you want to read more about the history of science and alchemy, some great books I came across in my research are:

‘The Book of Alchemy’ by Francis Melville, 2002

‘The Elements: A Very Short Introduction’ by Philip Ball, 2004

This site uses Akismet to reduce spam. Learn how your comment data is processed.